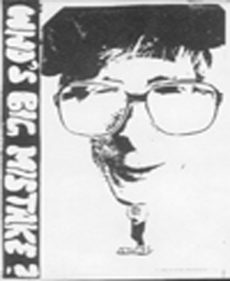 Take off The Mask

Within 6 months of forming, the band got together for 2 nights to record in an old fur storage locker in downtown Willimantic, CT.  This storage locker was more famously known in the day as the Populous Pudding Nightclub.

BiG MiSTAKE had opened at the club a few times prior and had met the soundman Michael Bloomer, who offered to record them for a few bucks.

The club showcased lots of bands in the late 80’s and early 90’s, some bands BiG MiSTAKE played with there were Yuppicide (NYC), Glee Club (NY) and Bloodbath (MA).

There are 12 songs on this tape – each different and very raw. With the oldest member of the band at age 19 and the youngest at 15, it reflects the early workings of the band shaping their sound to what their sound is today.

Some of the early songs that are still popular today are “Take Off The Mask” and “Michelle”.

There definitely is an “open” sound to the recording, mainly due to the sound bouncing off the walls of the non-insulated and narrow fur locker.