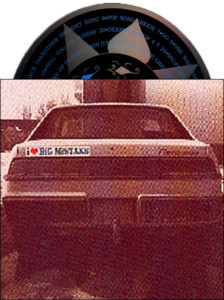 Tell You on Sunday

Tell You on Sunday

Take Off The Mask

“i” – the first and only full length studio album the band has ever made – and almost was not made at all.

After 2 weekends of recording back at Interwood Studios in Springfield, MA with Paul Interland, and recording a live show at The Boiler Room in New Britain, CT – band was ready to make their full length CD.

The band saw an ad in the magazine of all magazines in the day – Maximum Rock and Roll – who advertised great prices on CD pressing, contacts and distribution in the U.S. and in Europe, plus with color artwork and shrink wrapping.  Too good to be true?  Nah.  You’re just pessimistic.  You see, there was no internet then.  No google search.  No nothing.  Just a magazine with ads.  That’s how you booked tours, found bands, found friends, bought shirts, found out about news, bands, and lots of other things.  It’s hard to imagine unless you lived then, or you are completely without wifi and no battery on your phone and you are trying to get somewhere you don’t know where it is and you don’t know where you are and so on and so on.

Anyways, after a few phone calls and a money order sent as a deposit, the band sent their CD artwork layout, studio masters and a money order for the remainder to an address in Michigan, and the band planned their record release party and waited for the UPS truck to arrive with a huge box of brand new CD’s.  Excited?  Yes.  Did that box come?  No.

After 2 months the band called the manufacturer’s phone number and got a “this number has been disconnected”.  The band was a bit confused, and a lot worried, but what were they to do?  After a few weeks the manufacturer called them and said he “expanded” his business and set up a facility in Las Vegas, and wanted to know if the band wanted to get in on some discounted pricing on more disks.  I mean, they were already being pressed at his contact in Los Angeles and was meeting with him next week, and it would be easy to add in some more disks since they already had everything set up.  And he guaranteed that all would be done and shipped back in three weeks.  What would you do?  Well, the band did the opposite.  They sent another money order to get some more CD’s.

3 weeks went by.  Then 4.  Then 5.  On the 6th week, the band has a meeting to decide what to do.  Some voted to just press a 12″ vinyl and cut their losses.  Some voted to wait it out.  Some said “F That”.  So nineteen year old Chris got on a plane to go find this guy and get some answers.  He met with the Las Vegas Police Department and after a long conversation they said that they really couldn’t do anything.  That is, until another officer came out from behind the counter and remarked that his kid was in a band, and that if anything like that happened to his son, he would be pissed.  So he and another officer offered to go over with Chris when they were off duty and to go check out this manufacturer.  This “manufacturer” was operating out of a shabby apartment building, and after the officers pressured the landlord, the went to see the apartment – which the landlord said was just vacated a week before.

Back in CT with no artwork, no studio masters and no money, the band decided to get new studio masters made and go shopping for a 12″ release, which meant that they would have to cut some songs off the list due to time constraints.  A few weeks later Mr. Manufacturer called once again, apologized for the delay because all of the CD glass masters were “destroyed” in the Northridge, CA earthquake of 1994.  He was calling because he had to move the job to New York City and that he wanted to see if we were okay with half of the release amount, being that this place was busy and didn’t have time to run all the CD’s.  The band took a vote and Rob and Chris decided that to offer him more money, send it to him “overnight” – but instead would drive out to whatever address he gave them and confront him.

That night they agreed to send him money to an address in Michigan.  Rob and Chris hopped into their car and drove overnight to Ann Arbor, MI to get breakfast and buy a map.  They thought the address given was in Ann Arbor, yet was actually in Warren, MI.  Armed with the Las Vegas Police report, they went to the local police and told them their story.

At first, they police said that they couldn’t help them.  They referred them over to a detective, who, actually, was in a band himself in the day and was just disgusted that this person took all of our money and was trying to get more from us.  This detective called next door to the District Attorney’s office and an hour later, Chris and Rob were sitting with an Attorney who said he would call and “scare the beejesus” out of the guy and see if he will give us our money back.  The attorney was quite clear – he said that he would “negotiate” on our behalf, but we shouldn’t expect for everything.  We opted for the artwork and the audio masters if he had them, money second.

The attorney made a phone call and got an answering machine.  After stating he was calling from the District Attorney’s office and wanted him to call him back, he hung up the phone.  As the attorney was telling us that it was now 2pm and that it’s likely that this guy won’t call back, we should get some lunch and come back to see what we can do next week sometime.  Just then the phone rang and the manufacturer’s “Secretary” was on the phone and wanted to know what the issue was.  After explaining that the manufacturer was being looked at for extortion, mail fraud and larceny, the attorney just wanted to know if the manufacturer would come down and just explain what was going on.  The secretary said she would have to call him back in awhile.

Shaken up, Rob and Chris went to eat and came back in an hour.  The attorney said that he called the Detective and that they arranged for us to go to the manufacturer’s address and see if they could get him to talk to us.  Imagine that!  Rob and Chris drove in their car and followed a police car to the address.  While waiting in the lot, Rob was taking pictures of people coming in and out of the building.  When Rob and Chris went into the building with the Police, the “secretary” wouldn’t open the door without a warrant, that the manufacturer just left, and that she wouldn’t talk to us.  Rob asked for her just to give us the masters and the artwork, and she said she doesn’t see them there, that she looked.

Rob and Chris returned to the District Attorney’s office, now ready to close for the weekend, they discussed that they would look into this guy but couldn’t promise anything.  Just then, the phone rang – it was the manufacturer.  He asked to speak Rob and Chris, both confused as what to do.  The attorney put them on speakerphone, and the manufacturer claimed that his “secretary”, aka his girlfriend, is so distraught that she grabbed her things and left, and that he was pissed at us for not believing him and not giving him enough time to get our CD’s out on the UPS truck that afternoon, that we “missed” the ship date because he had to run back and forth to the office to calm him secretary/girlfriend down.  Rob started to go off on him, the Attorney steps in and states that if he doesn’t return the artwork and studio masters by the end of the day, a warrant will be written up and that he would be arrested.  The manufacturer said he would not come to the police station, agreed to meet Rob and Chris at a local mall.  Rob and Chris agreed, left to go to this mall, and waited.  And waited.  And waited.  Their pagers never beeped (remember pagers?).  And by the time the mall closed, Rob and Chris still had nothing.

And then a miracle happened.  Later that next week, a package arrived.  A lot smaller than 5000 CD’s.  A lot smaller than 1000 CD’s.  It containted the artwork, the studio masters, and a money order for a few hundred dollars and a note, saying we runied his life, ruined his relationship with his lady, and possibly ruining his business once people found out that he couldn’t deliver products on time.  The next day Chris received a call from the District Attorney and said that he talked the manufacturer into giving us $100 a month until we had all of our money back.  We thanked him found another person to press the disks.

The band only received 60% of the money ever sent.  And the picture on the CD?  Turns out, the police ran the plate and that was the manufacturer’s car.  Rob had gotten a picture of him getting out of the car and going into the apartment before they all went inside.  With all of that said, “i” has 26 songs, some studio, some live recorded at The Boiler Room on April 4th, 1993.