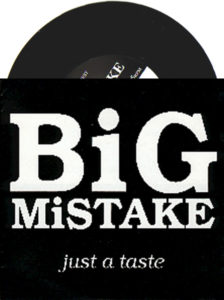 The third release from the band, Just A Taste is a 3 song EP showcasing the various musical styles of BiG MiSTAKE.  While the band was working on lots of different material, they felt that these songs just needed to get out there, and the song “Deeper” remains one of their biggest hits.

The album was recorded at Upstairs Audio by Michael Bloomer in the now cleaned up barn in Willimantic, CT.  By this time, Michael had gained a sense of what type of music the band had been driving towards and helped captured that sound and energy in a single weekend.  The outcome was their most diverse sound and style yet.  By mixing in some funk and rock for “Indecision”, emo power-punk pop for “People Change” and the addition of Gabe on the trumpet for the first time for the song “Deeper” made a combination that was sure to please.

“Deeper” has been a fan favorite and band favorite since the beginning, and over the years it has mutated to change the times and styles the band has been working with.  Sometimes the song runs long with a reggae twist, sometimes additional horns join in from members of bands like Spring Heeled Jack, and even a tweaked version with Gabe on the guitar and not on trumpet, but overlaying his guitar to mirror the trumpet parts.

Fans always enjoyed the variations, including the legendary “Flaming Trumpet” which delighted fans and pissed off club owners.  While this was years before the Great White tragedy, the band always took safety precautions and had extinguishers on hand in case things went too hot.  Before the trumpet even touched a stage on fire, it was tested several times to explicitly NOT get too big or become unstable.  Besides extinguishers, a common sight was a large bucket of water at Gabe’s side, where the trumpet would be plunged after the first opening section.