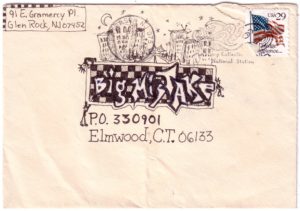 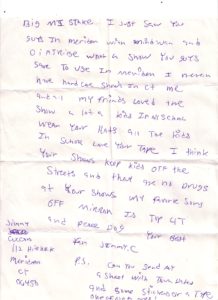 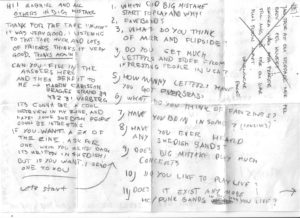 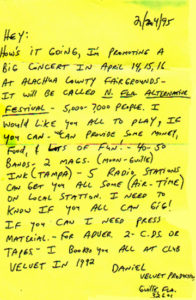 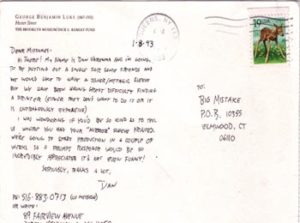 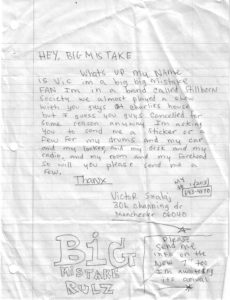 If the story was only so easy to tell…..

Everyone was in high school-ish at the time, the age difference between the band members is 5 years, Ted being the oldest and Chris being the youngest.  Gabe knew Jen, or Jen knew Gabe, or the two met each other through mutual friends, just like Gabe met Chris or Chris met Gabe through their mutual friend Kevin, who was Chris’s neighbor and helped deliver Gabe’s paper route while on vacation one year.  Rob went to school with Chris’s brother and Chris and Rob played Sex Pistols and Clash covers as a drummer/guitar outing with no singer.  Ted knew Jen as Jen knew Ted and Gabe one day remarked to Jen that he wanted to start a band and Jen said she wanted to name a band “BiG MiSTAKE”.  Gabe met Rob through Chris and the three of them played in Gabe’s room and came up with “Theme Song”, which is on their demo tape. This early version in Gabe’s room was a little long at 15 minutes, and was missing something…. a Bass Player.  Enter Jen, her name with the band and her skill at the Bass rounded out the sound early on with melodic low end that help offset the rest of the noise.  Gabe wasn’t singing all the time and then Ted entered the group with his 12” Mohawk and screaming voice.  The 5 practiced what seemed like all the time to prepare for the Southington Connecticut Battle of the Bands.  Their appearance was alongside another New Britain band called The Void, who later became Frogboy, which isn’t strange, not because of the name but because Gabe and The Voids’ Guitarist Billy were neighbors as well.  At the Southington Battle of the Bands BiG MiSTAKE was surrounded by cover bands and glam rockers who had a gigantic stage that was 180 degrees wrapped around their drummer.  BiG MiSTAKE was 5 awkward kids, Ted with his gigantic Mohawk and they played 1.5 songs, getting through “Theme Song” with 150 stickers thrown out to the crowd, and just as “Think About It” was in mid-song, the amplifier Chris built blew up.  It doesn’t take Mythbuster’s to tell you not to run a Guitar, Bass and Vocals through 1 Amplifier…. because you will get a puff of smoke and no more sound. Hey, he was only 14, who knew anything then?  Inspired by their 5 minutes of Chaos they continued on to what they became later on and music they left behind.

But wait, we skipped over a bunch of stuff.  They practiced and played and practiced and played and often worked at the same places of employment at the sandwich shop or the bookstore and bought a van or two and broke several trumpets and a few thousand strings and had heavy amplifiers and drums with cases and three low end bass’s and toured around and drove all around up and down and east and west and stayed at campgrounds and slept on people’s floors and played some more and practiced at times and recorded a few albums as time went on.  In the mid-1990‘s Rob went to Chicago for school and the change led to the addition to Jeff on drums, who played in the bands Die My Will, Fineline and Hatebreed.  With Jeff they played and toured some more and with life and work and work and life some elements changed in the band, with Ted now living in Brooklyn, NY the band played on with Jen’s brother Jon filling in with Vocals and the bands’ friend Ken helping out singing along the way.  The band even did a show without Gabe and had Billy from Frogboy take over on guitar while Ted filled in the Vocals and Trumpet as well.  Late in the 1990’s life and work and work and life intervened once again and the band played a trio of final shows in the tri-state area and had a good time doing so.  BiG MiSTAKE reunited a few times over the years at various benefit shows and some of members have been in bands since or are in bands now or maybe they will be in a band with you?  They all were part of something special that they helped create a musical sound, and have been always grateful to their families, friends and fans who helped them along the way over the years.

Or until you write in to add to the story with your story. 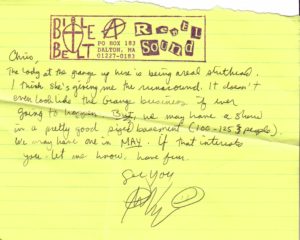 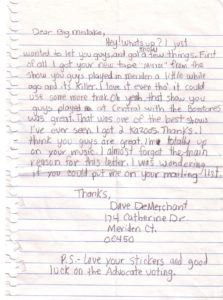 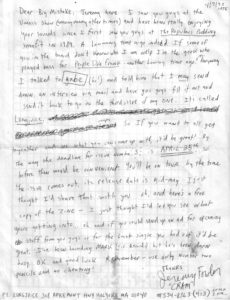 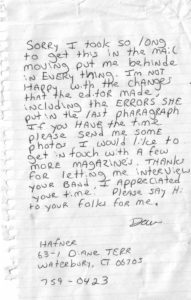 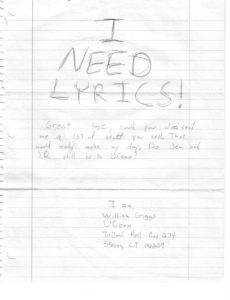