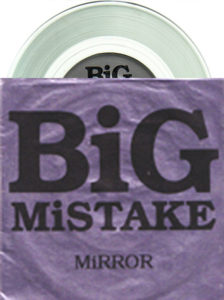 Mirror was BiG MiSTAKE’s landmark release: 6 songs tuned to perfection, a great combination of energy and musical styles, their 4th release proved to be very popular.

Recorded in Springfield, MA at Interwood Studios by Paul Interland, the band had been introduced by Mark Dargee, and they had heard his band SPOKE album that was recorded there and wanted to give him a try.  Paul had big teased out hair and was in a Led Zeppelin tribute band, so they figured why not?

The album was recorded over one very long weekend, with two additional sessions for additional vocals and horns.  Their current show schedule and with all the members being in school and working jobs added to the intense weekend of work, and they felt that they had captured the feeling just right.  Paul’s guidance gave the band’s recording a more “live” feel and with a lot more dynamic energy.

Another challenge with making the 7″ was what songs to put on which side, because there was only so much time allotted for each side, the band decided to end each song “tight”, without fades in order to fit three songs on each side.

Mirror has 6 songs, the title track being a powerful leap for the band.  This release has a little of everything: hardcore to pop, ska to rock.  Gabe appears on the trumpet once again for Top-4T, and with Ted and Gabe trading vocals on several songs, this was to be a popular combination and a unique sound for the band.