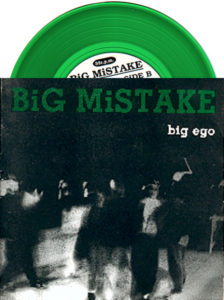 BiG EGO is the first record BiG MiSTAKE made.

Recording 10 songs for this release proved to be a challenge for the band.  They practiced for weeks to get all the timings of the songs exact and arranged in a certain order for 2 reasons: 1 – being they could only fit so many minutes on each side of the record and 2 – because funds would only allow 2 or 3 takes per song.  “You destroy da scene” was the most difficult to record and master.

BiG EGO has 10 songs, with lead vocals shared by Gabe, Ted and Jen.  This release varies once again with styles: pop, hardcore, rock, and even an early style rap, with additional guitar tracks by Gabe’s friend Garth.  Early fan favorites include “007” and “Take off the Mask”.

Green vinyl was chosen because all the members’ favorite color was green.  They are also all fans of Naked Raygun, the Bad Brains, and Pizza from Pizza Pal restaraunt – New Britain, CT.

Photo was taken outside the Central Connecticut State University Record Station (WFCS 107.7) near the library.

Released on Community Chest Records by Mark Dargee, the first of many with a great friendship attached.

Take off the Mask