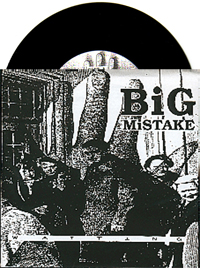 Waiting is the 2nd album release from BiG Mistake and came out right after they finished their first U.S. Tour of the East Coast and Mid West.  The tour only had 2 shows, Rob the drummer fractured his foot at a campground and band  members parted opposite directions for the summer as a result.

The album was recorded by veteran engineer Michael Bloomer in Willimantic, CT at yet another new location, this time Upstairs Audio had been relocated to a barn out in the country.

Three weekends of recording were captured on videotape by Ted’s roommate Mike P. , an aspiring film writer / director.  One event from those sessions was missed though.  While Ted was laying down vocals tracks in the vocal booth, Rob was filming some of Ted’s yells and screams.  Unbeknownst to him, Michael Bloomer came out from the control room with a fire extinguisher in his hand and wanted to make a dramatic effect for the camera by releasing the contents of the extinguisher at the camera Rob was holding.  The studio (and equipment) was now covered with the chalky white extinguisher residue, and nobody knows exactly why he did this, and even stranger why he left the board at all……..

5 songs on this album vary from pop to rock, with a sprinkle of hardcore with an early alternative edge.  This release captures the musical styles BiG Mistake is known for.  From the song “Waiting” containing ferocious energy,  “Pissed Off” showcasing Ted, well, pissed off, and “The Hobbit” using alternative rock and lyrics about a troll in the woods with wah-wah guitar pedal textures – all the elements that start to shape the sound of the band.