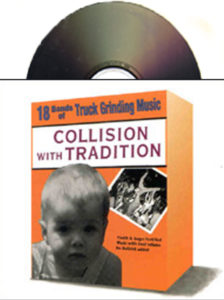 COLLISION WITH TRADITION is a music compilation put together from a collective group of artists and musicians located in and around New Haven, Connecticut.  At the time there were a lot of different musical styles playing in the clubs and this is a great group of the sounds of the time.

18 bands, 20 songs, 75 minutes of music, this CD features only one BiG Mistake’s song entitled “electric”, which later became of the the band’s biggest hits.

The song “electric” made its way to this CD release before BiG MiSTAKE’s actual album release of the song.  Why?  Slick promotion?  Well, it comes in two parts.  Part one is just plain promotion.  The second part is the result of the upcoming album “i” having been from the “record distributor”, AKA con-man, hence is what is known as the “CD Saga” with BiG MiSTAKE fans.

The quick version: you place an add in a magazine (no internet existed then…. imagine that if you can), you send your artwork, studio audio masters and money.  You never get CD’s.  We then come after you.    The CD Saga is told in its entirety on the BiG MiSTAKE Home Video.

Men With No IQ’s